Lit Diaries is a book lounge that curates experiences & activates community-driven events that are literary and culturally infused. 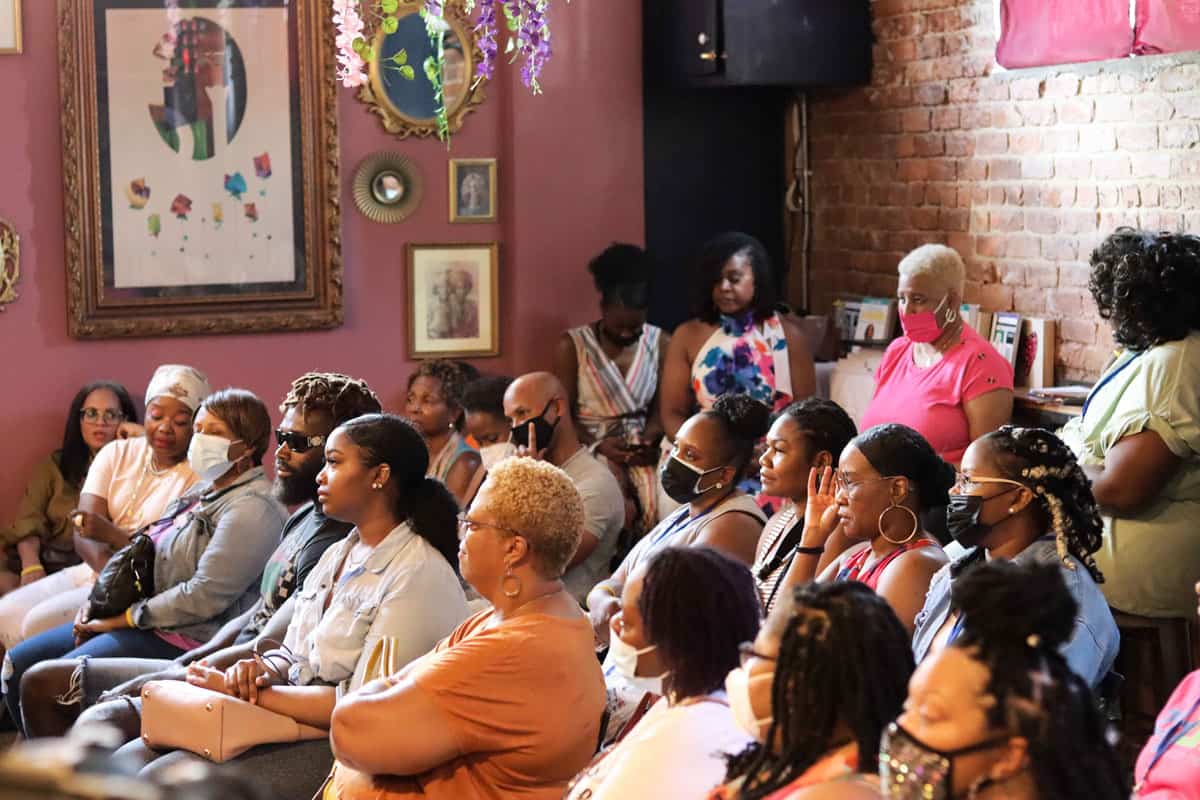 HOW LIT DIARIES WAS BORN

Our Lit Diaries journey started with a pop-up event hosted by Tamika Newhouse, founder of African Americans on the Move Book Club, Inc. (AAMBC) and held just two months before the pandemic hit. The event featured creative black women in publishing and film, providing them a safe space to share their journeys and create authentically. The purpose of this event was to dare women to dream and heal together through intimate conversations and affirmations - sort of like the way you would engage with your personal diary. The energy from this event was SO positive and palpable that it was immediately apparent that our work with Lit Diaries was just beginning!

Through surveying the event attendees and our extensive network of over 15,000 Creatives affiliated with AAMBC, we discovered the strong need and desire for a physical space dedicated to literary arts entertainment within the African American population. 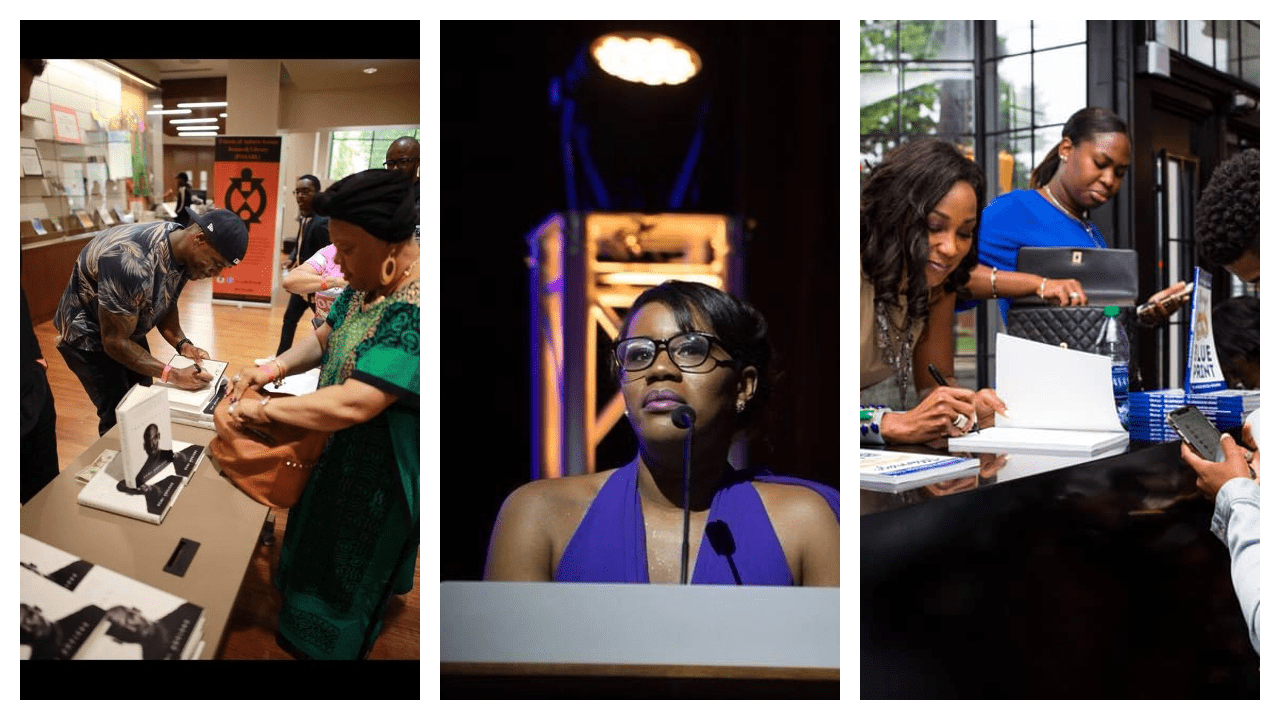 Imagine being able to go to your favorite bookstore and purchase an autographed book by your favorite author, while also being able to engage in intimate conversations with the author through exclusive events, discussions, workshops, and masterclasses. In this same space, you can meet and work with other Creatives, exchange ideas, and network with like-minded people. You’re also able to bring or refer children you love to experience dynamic after-school and summer programming designed specifically for youth to hone their creative skills and build their confidence.

This is what we have in store for you! 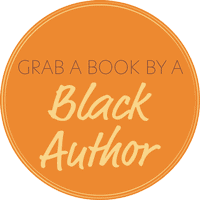 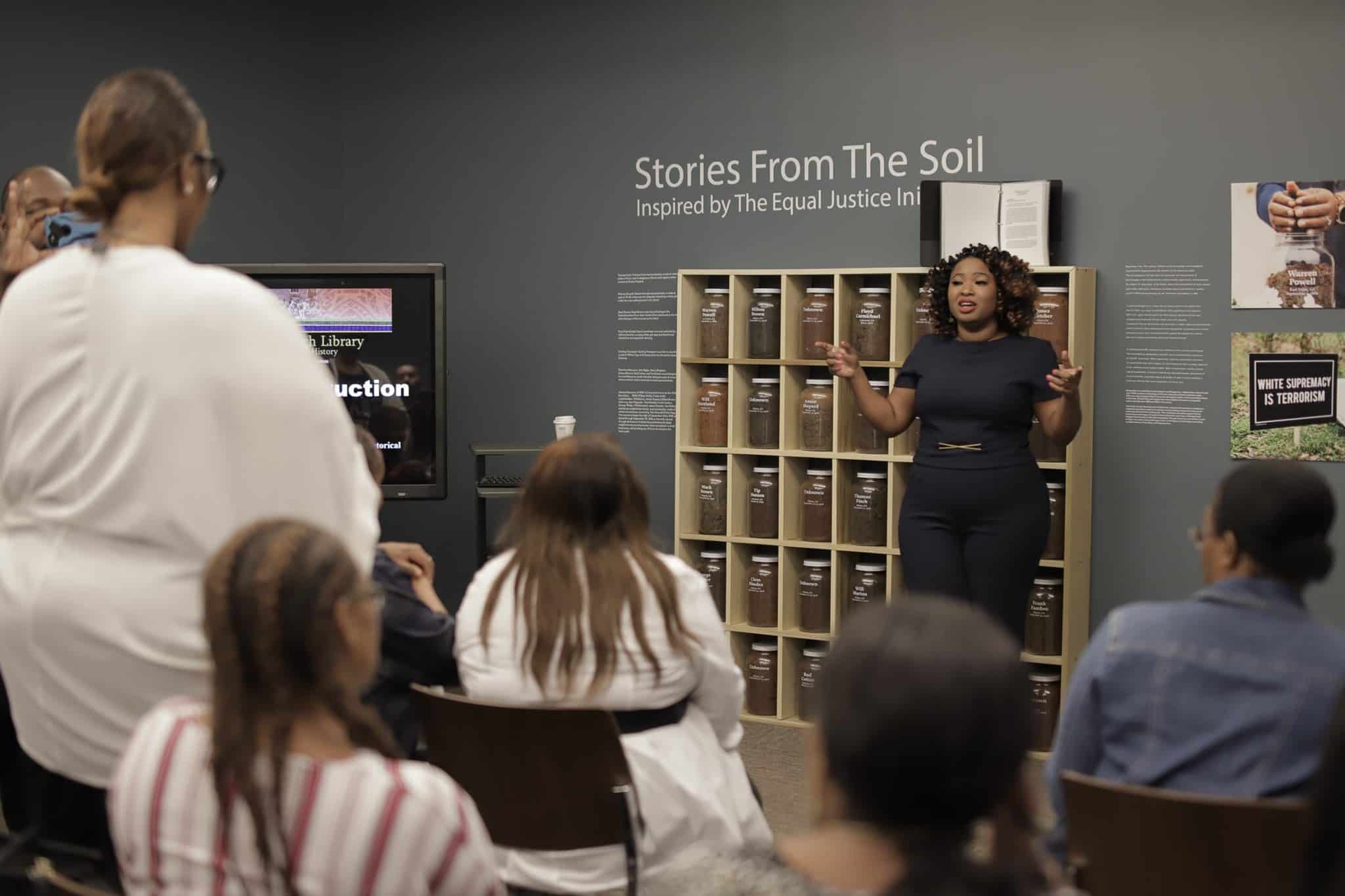 WHY IS LIT DIARIES NEEDED

Currently, the spaces that are dedicated to literary arts entertainment and the celebration of Black creatives are few and far between. Black literary creatives, in particular, are hungry for a physical space where they are equally recognized and represented.

We are also aware that there’s a disparity between how deeply embedded literary arts is in every aspect of our culture and the fact that US adult illiteracy rates are as high as 22% in 2022. There is a pressing need to both celebrate literary arts and cultivate literary activism within our community. 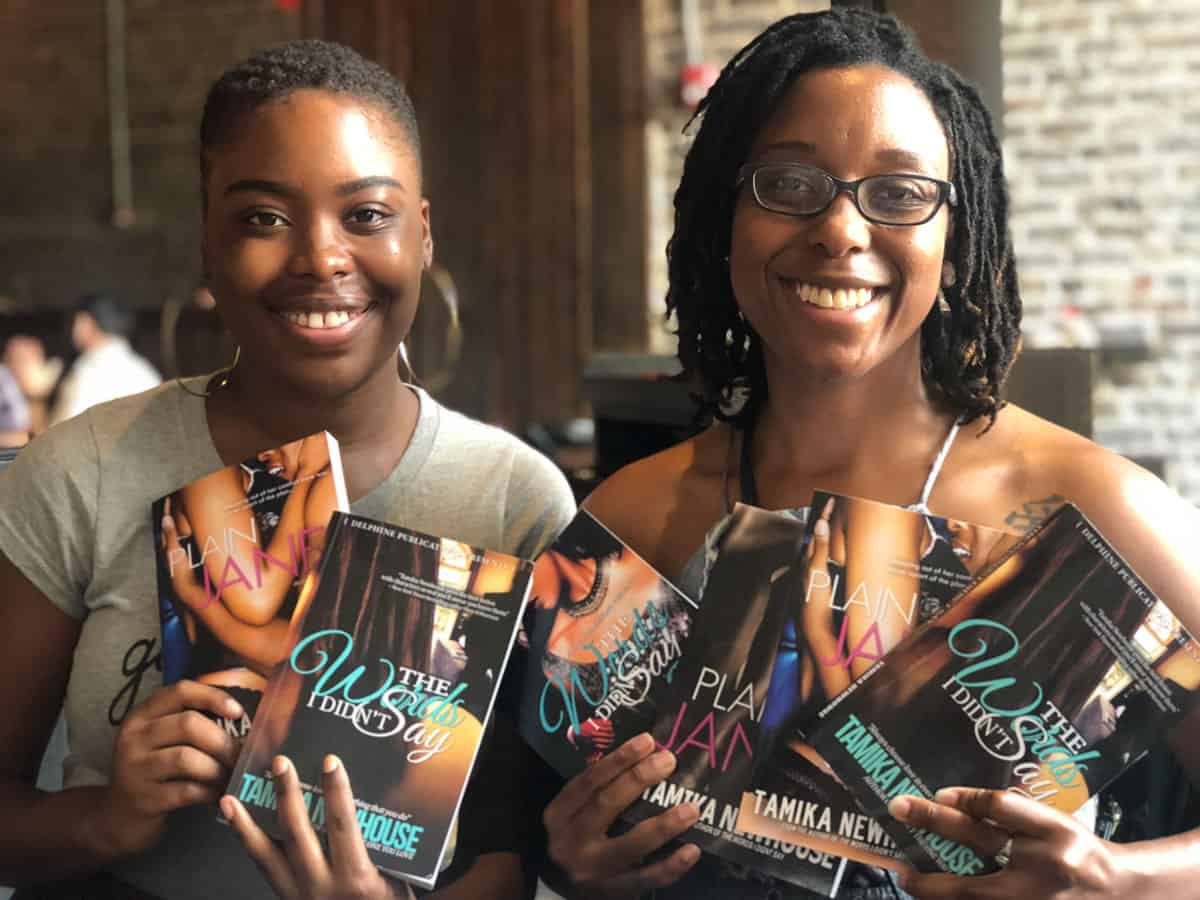 Lit Diaries is uniquely positioned to address these issues! We understand that a creative space like Lit Diaries is needed, particularly in communities that lack resources for literacy, art, and enrichment programs for youth and aspiring artists.

At Lit Diaries, we have the social capital and infrastructure for aspiring Creatives to meet and be inspired by successful Creatives that look like them, in addition to providing invaluable access to books, art activities, wellness classes, and a diverse talent network to collaborate and connect with.

Is to curate impactful experiences that bring a positive space to our community and that serve to elevate black creatives of all ages and stages.

To give you a glimpse into the work we’ve done to make our vision of Lit Diaries a reality, we’ve already received ample feedback and overwhelming support from our AAMBC community and associates. Thank you all for your encouragement!

We’ve also procured the physical establishment where Lit Diaries is located, which you can see here: 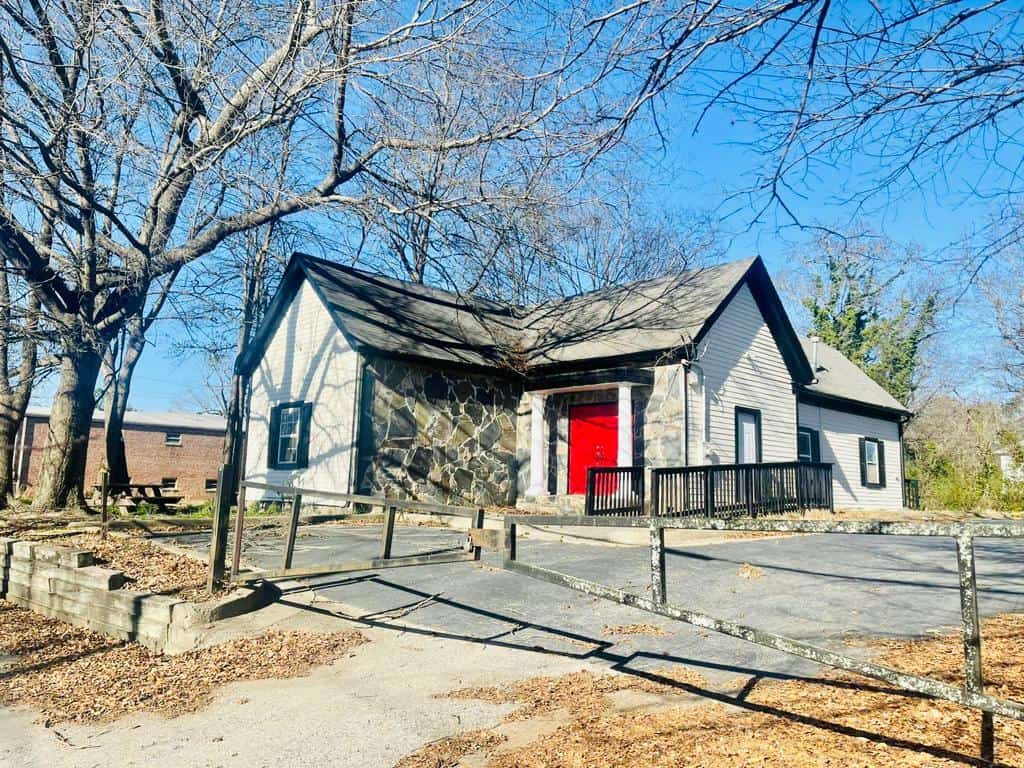 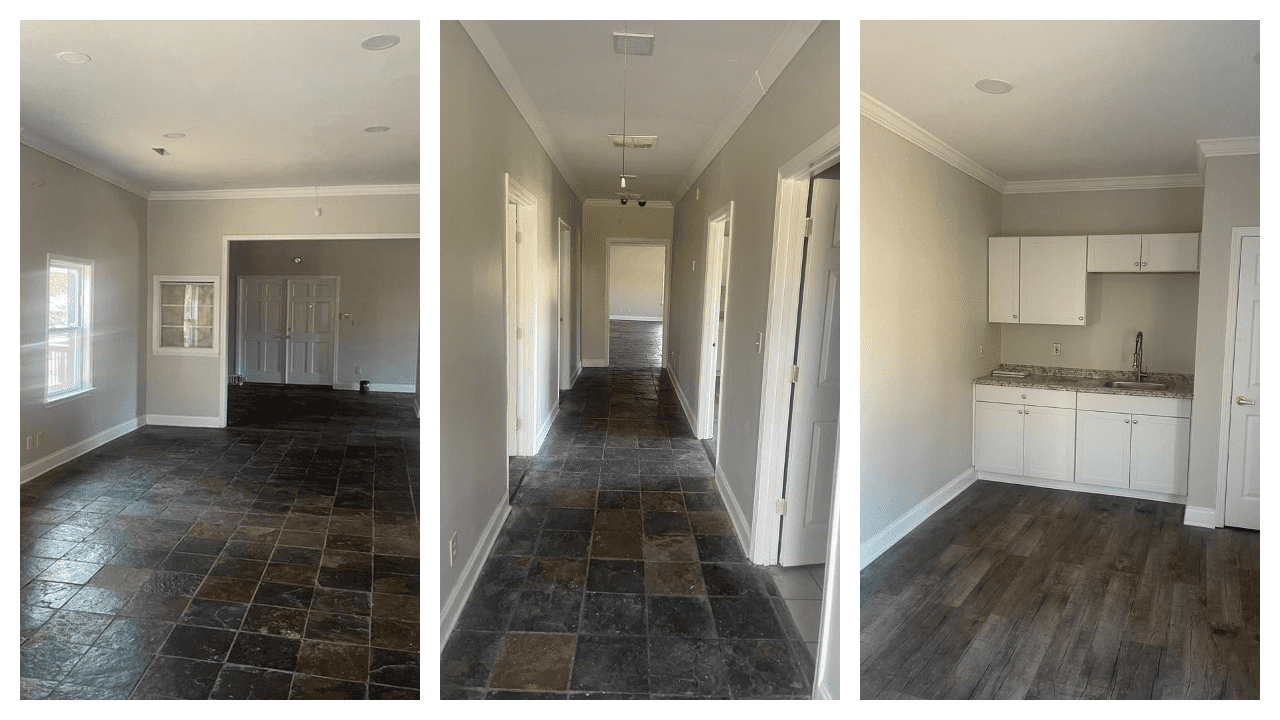 With your support, we will create a space you'll love and will be able to thrive mentally, emotionally, spiritually, and creatively!

Check out our dream board below: 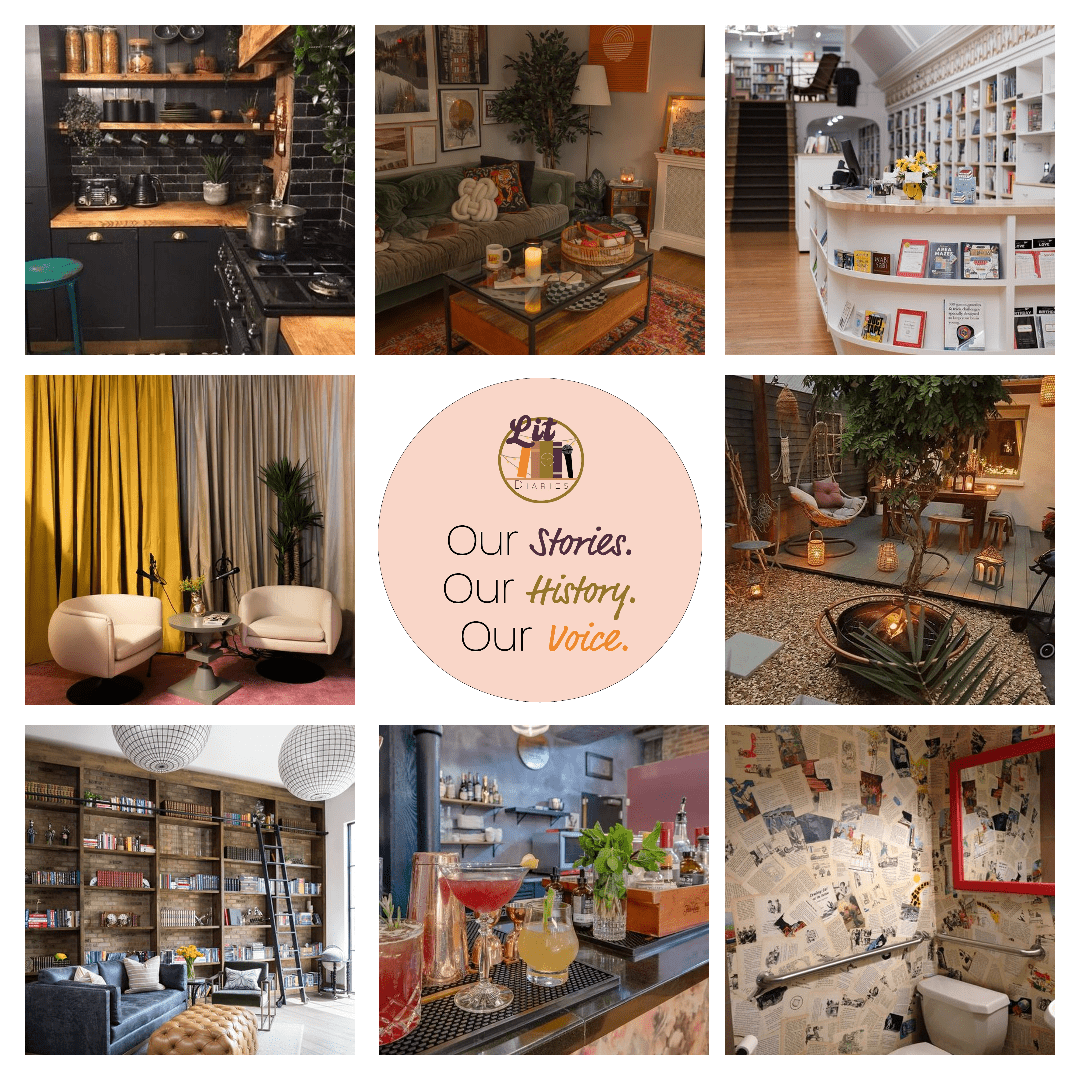 With our new home for Lit Diaries, we'll be able to

...Run workshops and masterclasses for writers to provide them with resources for creating and publishing

...Provide a safe haven for Black Creatives to connect, create, and heal together 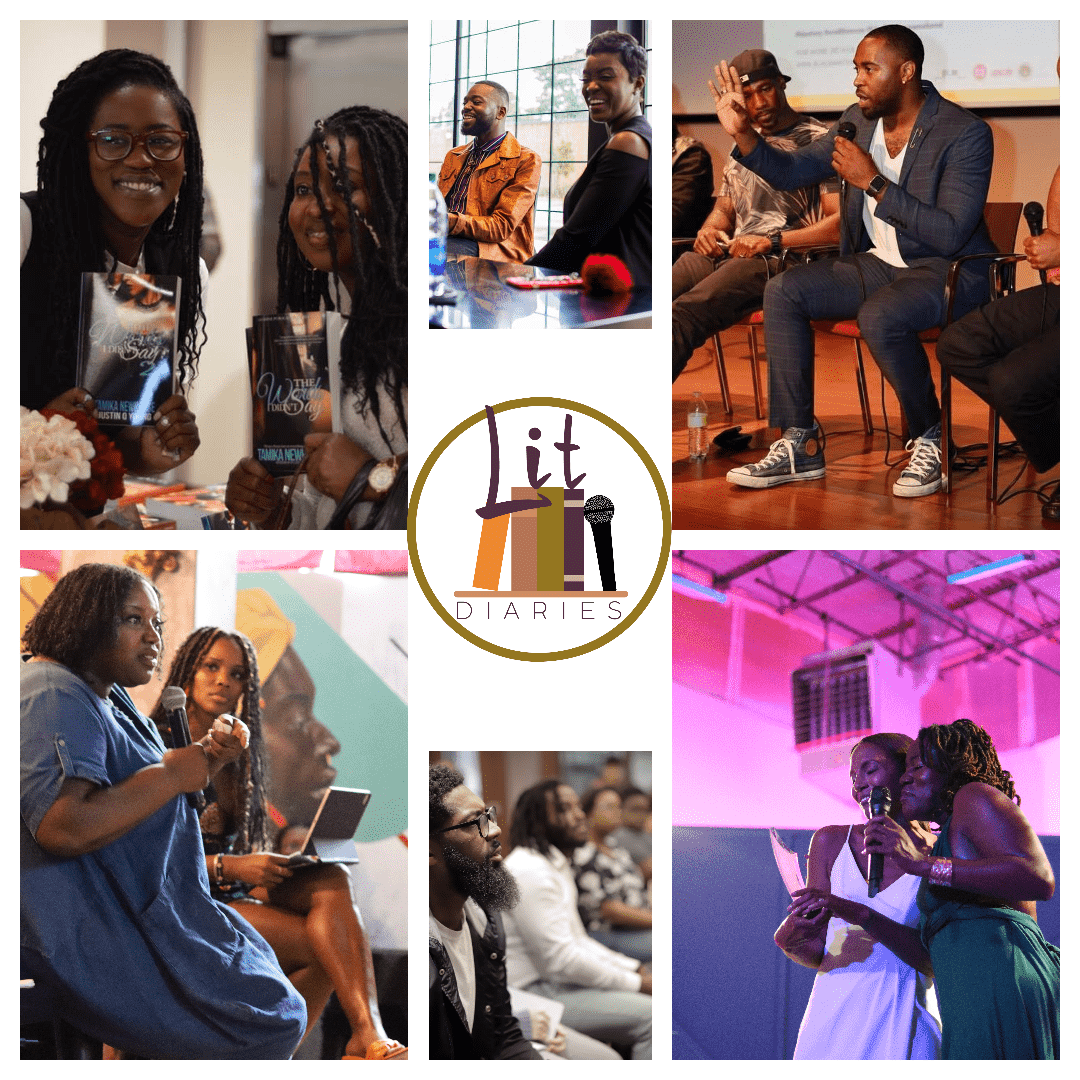 Together, our impact can be powerful! Creatives of all levels will be provided with the platform and community they need to learn, connect, and grow! In addition to preserving careers and passions for our fellow artists, our physical expansion creates jobs and opportunities that stimulate the local economy and education system, launching a cycle of increased upward mobility for our community.

In order to make our dream of Lit Diaries a reality for our community, we need YOU.

Many of you have been on this journey since its conception, and we couldn’t have made it this far without you. With your contribution through this campaign, we can continue our journey of promoting literary activism.

Every contribution matters and gets us one step closer to our goal!

We're raising $60K in our effort to open Lit Diaries, provide exposure for talented Creatives, and expand appreciation of literacy throughout the community.

The funds raised will allow us to purchase the venue design, marketing and product offerings, bar area, outside deck, media equipment, as well as contribute to contractor fees and staffing salaries. 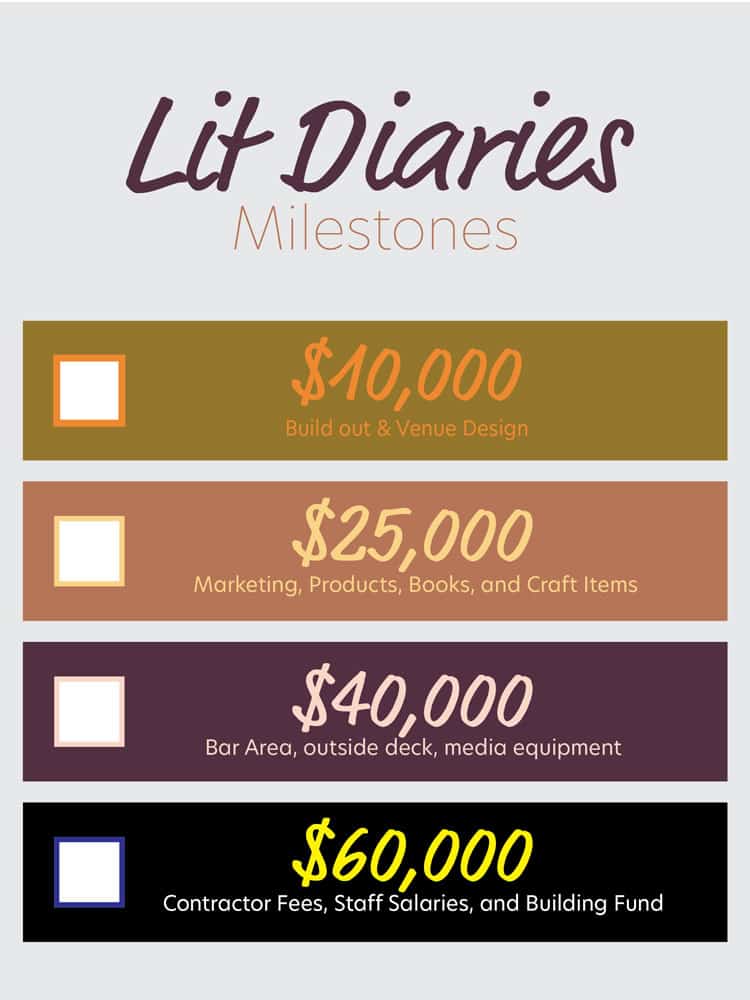 Think we can exceed our $60K goal? We think so too! Here’s what we plan to do for our community with the overflow: 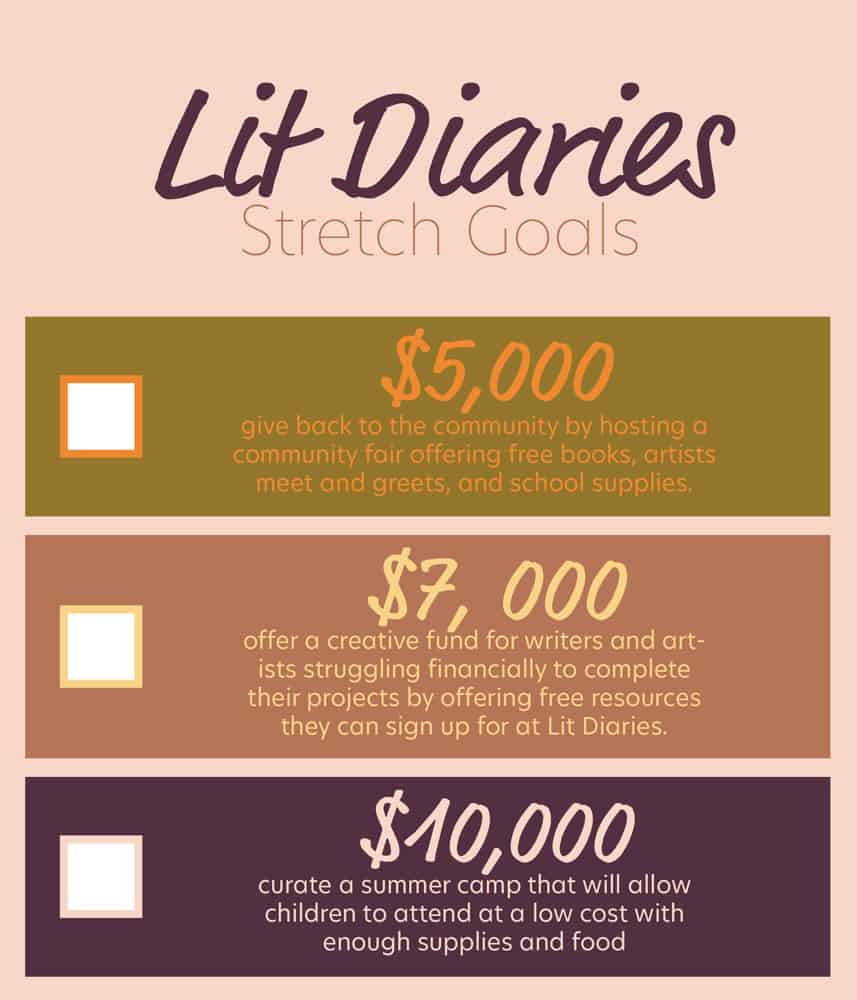 We mean it when we say that every contribution matters, and we'll prove it! Check out the perks of your investment below:

Tamika Newhouse | Kimberly Jones
From teen mom to CEO, Ms. Tamika Newhouse began her literary artistry at the age of twenty. Since then, she's authored over 16 novels, has landed on numerous bestsellers’ lists and is the winner of 8 African American Literary Awards. Her original series, Traces of Mika, is a society and culture podcast that features unscripted conversations with Tamika, her friends and family, and celebrity writers. The podcast was featured on the popular streaming platform, Pandora, as a top pick for listeners. Currently, Tamika is creating new stories that dig into motherhood, sexuality, and self-love while raising her children in Atlanta. The various ways Tamika has navigated the creative arts space are a reflection of her spirit of tenacity, hard work, and capacity to dream and achieve her accomplishments. Lit Diaries is one of many offerings the AAMBC Inc. and founder Tamika Newhouse has launched to promote the literary arts.
Kimberly Latrice Jones is an American author and filmmaker, known for the New York Times bestselling and NAACP Image award-nominated young adult novel, I’m Not Dying With You Tonight, and for the viral video How Can We Win published during the George Floyd protest. That same year, a seven-minute video featuring Kim using a Monopoly analogy to explain the history of racism and its impact on Black Americans went viral, being shared by Trevor Noah, LeBron James, Madonna, and more. Kim’s literary roots run deep, with features in numerous publications, including Seventeen, Bustle, Publisher’s Weekly, Shelf Awareness. She served on the Selection Committee for the Library of Congress’ 2016-2017 National Ambassador for Young People’s Literature, the 2015 Children’s Choice Illustrator Committee for The Children’s Book Council, and the advisory board that created the Creative and Innovative Education Master’s Degree program at Georgia State University. 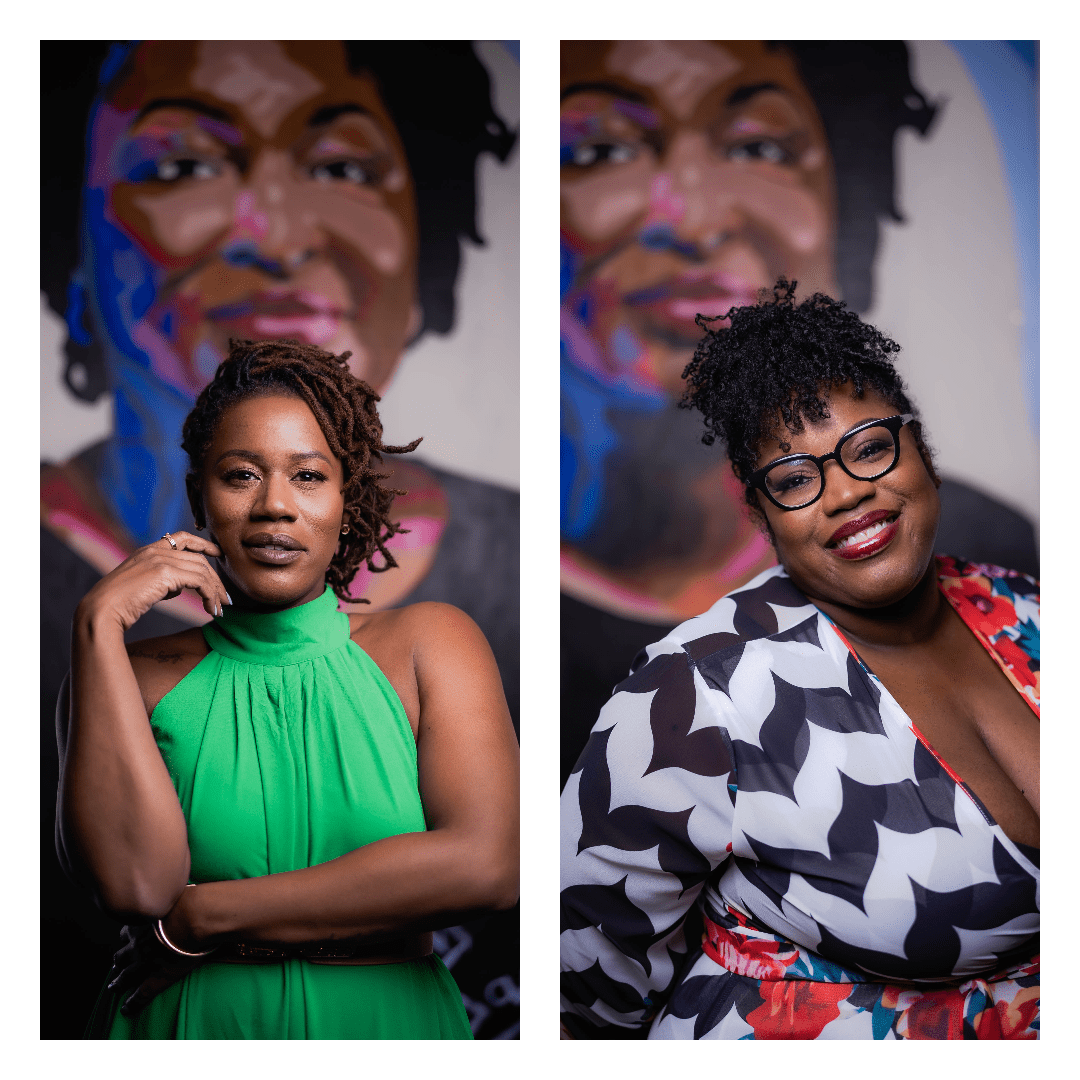 We're sincerely grateful to all of you who choose to invest emotionally, financially, and physically in the pursuit of Lit Diaries and our dreams! Join us in our journey and contribute today. Thank you!

Looking to contribute to Lit Diaries in a larger way?

If you would like to support Lit Diaries in a larger way, please reach out to us via info@ourlitdiaries.com.

After the campaign closes, a survey will be sent to you to confirm your delivery address and to obtain any custom information. We expect rewards to be delivered within 3-4 months of the close of the campaign, but will do our best to deliver them to you as soon as possible. We’re just as excited to get them to you! Please note that we can only deliver physical rewards to addresses within the United States through this campaign. Digital rewards, however, can be delivered worldwide. Rewards that are only available within a particular geographic region are noted in the reward description.

We want you to love Lit Diaries! Your feedback will help to make our products even better! If you want to leave a product review for us, please email info@ourlitdiaries.com.